Not only is it bigger, it is better…exploring the art of thinking out of the box.

I am always looking for common denominators among successful entrepreneurs, studying those who have made their mark today and yesterday. One of those common elements that I have written about in the past is tenacity; they stick to it despite circumstances, opinions, obstacles and the like.

Another one of the common threads I see among successful entrepreneurs is an ability to think out of the box, and for some I mean way out of the box.

Another one of the common threads I see among successful entrepreneurs is an ability to think out of the box, and for some I mean way out of the box. Take the example of Edison; while the average person may work on providing light for themselves in his day, he was determined to bring light to the multitudes and thus his thinking was on a different level than the average man of his day. Entrepreneurs look at projects in a different light; they see larger more global concepts. They are big picture visionaries. Most would stop for example when weighing the herculean obstacles of developing a new technology and the infrastructure necessary to support it but when Edison was seeking the correct filament for the electric bulb that was only a part of the picture which included a power company and the creation of a whole new industry.

Of course one must be more than a visionary to be a successful entrepreneur, again I will mention that I have many come through my office with great ideas but lacking the skills and abilities to bring that great idea to pass. 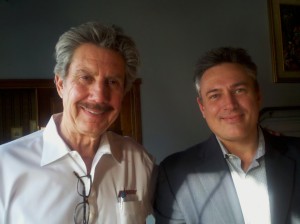 fortunate to meet last October at the International Symposium for Personal and Commercial Spaceflight, Robert Bigelow of Bigelow Aerospace.

Robert Bigelow founded Bigelow Aerospace in 1999, bankrolling the company using some of his fortunes from construction, real estate deals and his hotel chain, Budget Suites of America. Right away you see that he is an out of the box thinker when you take into consideration his plans; his mission has been to provide affordable options for spaceflight to national space agencies and corporate clients. In 2006 and 2007, he launched his orbiting prototypes Genesis I and Genesis II. Using his patented expandable habitats, the plan was to greatly exceed the usable space of the International Space Station at a fraction of the cost by developing his spacecraft.

A colleague and I spent nearly a full day with Mr. Bigelow touring his facility which he is expanding again by over 180,572 sq. ft. and which is scheduled to be fully operational mid 2011. With this expansion production will begin on Bigelow Aerospace’s planned first full-scale module, the Sundancer, targeted for launch and orbit in 2014. The first station complex will also include the BA 330 module, which will have almost twice the volume of Sundancer. That is even more amazing when you consider that it is 45 feet long and 22 feet wide compared to the International Space Station dimensions of 28 feet long by 13 feet wide. Not only is it bigger, it is better. BA 330 utilizes an innovative Micrometeorite and Orbital Debris Shield. Hypervelocity tests conducted by Bigelow Aerospace have demonstrated that this shielding structure provides protection superior to that of the traditional “aluminum can” designs utilized in the ISS.

With well over a hundred employees, state of the art facilities and out of the box technologies, Bigelow Aerospace is producing at a fraction of the cost that NASA has spent, a living and working environment for the masses in space. Access to space will soon be available not just for a few elite countries and organizations but to the multitudes. Through leasing and shared leasing of these commercial space stations even some of the smallest of countries and business can have access to a microgravity atmosphere for research and advancement. Bigelow Aerospace will provide flexible leasing opportunities for volume and time based on a customers need with a completely turn-key operation as is clearly seen in their client leasing guide. When we think of all of the advancement in technology that has been brought about due to the existing space program and consider what could be accomplished in the future with this greater access, it boggles the mind.

The incredible thing is it doesn’t stop there. All of this, as grand as it is, is just the foundation of a much larger picture. His vision is way beyond the scope of most and one that maybe not realized completely in his lifetime. His concepts would be considered by many to be science fiction. Here we go with thinking way out of the box…colonization and ownership of first the moon and then mars. I know what you are thinking; I would have thought the same thing four or five years ago, but not anymore. Let me take you back to a time when we thought the world was flat and that if you sailed too far you would fall off the edge. With increased knowledge, experience and technology, we moved beyond that belief. The same thing is happening today, I have interacted with the likes of Columbus and the Lewis and Clarks of the emerging space industry and I see this as a future reality.

For all of my Christian friends who read this please recognize that I am totally aware that the Lord may return tomorrow, but if He tarries this is just as doable as it was for our forefathers that sailed the great expanse of the sea and settled this great nation.

These modulated space stations can be assembled in an array of configurations and be flown to the moon, tethered to the surface and act as a staging area to travel on to mars. Now this long term goal, as fantastic as it may seem is not just Mr. Bigelow’s dream. There are others working towards this as well. It is vital to the interest of our country that our commercial space industry flourishes. That is a big picture out of the box concept, do you see it?

My hope is that there are many more with this entrepreneurial spirit that seek the rewards that come from risk-taking and world shaping.
View all posts by Troy Tudor →
This entry was posted in Commercial Space, Entrepreneur, Entrepreneurial Spirit, Entrepreneurs, Innovation, Space, Technology and tagged Bigelow Aerospace, Genesis II, International Space Station, NASA, Robert Bigelow, Space station, Sundancer. Bookmark the permalink.